Yes this is a fact and don’t laugh just yet. No, Stephen Curry has not had as good of an overall career as some others that have played since Michael Jordan retired. Kobe has won 2 more championships, an MVP award, and has surpassed “His Airness” on the all-time scoring list. LeBron James has cemented his place in league history with 2 championships, 4 MVP awards and, as he enters the later stages of his career, is on pace to potentially dethrone Kareem Abdul-Jabbar as the all-time scoring champ. Tim Duncan has even gotten himself a couple more rings and proven the existence of the fountain of youth. But this year, as Stephen Curry and the Golden State Warriors chase history to be the best team since Michael and his 96 Bulls, “The Baby-Faced Assassin” has become the greatest basketball player in the world and is having the greatest offensive season in NBA history. And I have facts to prove it.

Let’s start with Curry’s outstanding per game numbers. Over 54 games so far this season, he is averaging 30.0 points, 6.6 assists, and 5.3 rebounds per game. He is currently the NBA’s scoring leader and he has sat out 15 fourth quarters this year and is not even in the top 20 in minutes played. He also leads the league in field goals made by over 10 and is third in field goals attempted. He is 18th in field goal percentage for the NBA and is 2nd among guards. The only guard with a better shooting percentage is Tony Parker, who plays in the Spurs super-duper efficient offense which is a well-oiled machine that can give common rec league stars open shots. Now you might be saying to yourself right now, “yeah Pat this is all impressive, but best since Michael Jordan? Really?” Yes really. The simple everyday stats for Stephen Curry do not tell the whole story (as they usually don’t). Where you see the transcendent version of Steph is a mixture of eye test and my favorite measure of a superstar player; advanced stats.

Shown above are the Per 36 minutes efficiency stats for three of the best offensive seasons in NBA history: Jordan in 1987, Kobe in 2006, and Curry this year. What is constantly mentioned in the media is the short amount of time that Curry needs to score nearly 30 points per game, but what I find even more impressive is how he influences the game without being incredibly ball dominant like his predecessors have been. By looking at the three stat lines above, there is no real differentiation between the three from a total numbers perspective, but one player is significantly higher in the shooting percentage categories. Curry scores more points than Kobe and only 2 per 36 minutes less than Jordan did while taking a little more than 4 less shots than Jordan and 3 shots less than Kobe. His overall field goal percentage is 5% higher than Kobe and 2% higher than Jordan. I decided to take these numbers a bit further and calculate each player’s points per shot. Points per shot is the number of points a player scores per field goal attempt. In this comparison, this stat is important because field goal attempts don’t differentiate between 2’s and 3’s and don’t account for free throw attempts. It gives a general number that can predict how many points each player would score if they were to attempt the same number of shots. It is a bit easier to visualize Curry’s unprecedented dominance when looking at the graph below. 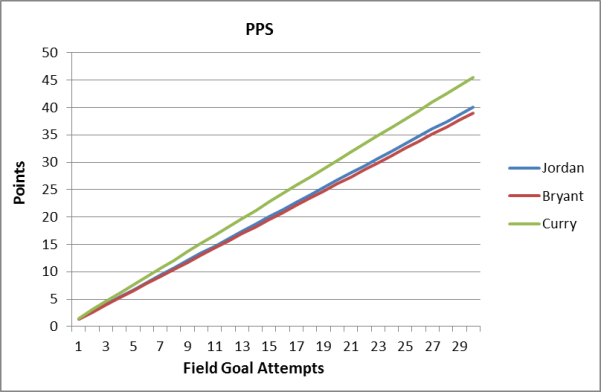 Curry also is on pace to break the record for a single season Player Efficiency Rating (PER). For anybody who doesn’t know, PER is a metric that measures each player against the league average. A PER of 15 is the average, and anything above a 20 usually translates to all-star status. Steph Curry’s PER this year is 32.1. The current record for a single season is 31.8 which was posted by Wilt Chamberlain in 1963, when he averaged 44 points and 24 rebounds. Stephen Curry has been so much better than the rest of the league this season, that he is outperforming somebody who averaged 44 points and 24 rebounds over an entire season. 44 points!

In addition to the PER, I decided I was going to do some calculations of my own. These calculations measure what I consider to be the 5 best offensive seasons in NBA history (only including one Wilt season and one Michael Jordan season) against Steph Curry’s current statistics. These seasons included: Wilt Chamberlain in 1962-63, Kareem Abdul-Jabbar in 1971-72, Michael Jordan in 1988-89, Shaquille O’Neal in 1999-00, and LeBron James in 2009-10. I weighted 7 statistical categories equally; points per game, points per 36 minutes, PER, offensive win shares, assists, rebounds, and true shooting percentage, and used each to compare the 6 players’ seasons. In order to make valid comparisons, I first reviewed these numbers and made note of their rank from greatest to least. Each player was given a point value based on where they stacked up against their competition. Once these point values were assigned they were summed and averaged to determine the best across the board. My name for this new, very basic metric: Patrick Ducey’s incredibly accurate, super-duper offensive greatness rating.

As most would have likely thought, Wilt Chamberlain’s season ranked 1st for Patrick Ducey’s incredibly accurate, super-duper offensive greatness rating. Chamberlain was a physical freak who put up ridiculous numbers playing in an era that is nowhere near the level of competition there is today. However, what may surprise some people is that Stephen Curry finished 2nd. Better than when Jordan averaged 32/8/8. Better than when Kareem averaged just under 35 points and 17 rebounds per game. Even better than Lebron James singlehandedly carrying a mediocre Cavs team to 61 wins while averaging just under 30 points, along with 8.6 assists and 7.3 rebounds per game. Stephen Curry, the 6’3″, 185 pound, Davidson alum, is actually putting together the greatest statistical offensive season in the modern NBA era (Or at least Patrick Ducey’s incredibly accurate, super-duper offensive greatness rating says so). And obviously this metric is somewhat flawed in that it doesn’t cover every offensive category and every offensive play and convert it into one number, but all statistics can be interpreted in different ways. This was just the best way I felt that each major offensive stat could be put together to determine the “best offensive season.” With that being said, the best part about Stephen Curry (and sports in general) is that numbers don’t tell the entirety of the story and a lot of what he and other athletes do can only be measured through the “eye-test.”

This is the fun part. The part where you get a ton of videos and GIFs of Steph doing ridiculous things that only Steph can do.

Often times you will hear play-by-play guys compare the way an athlete performs to a video game. In video games, they compare the virtual athletes to real-life Stephen Curry.

He has become the most entertaining show on television every other night and it is not just flashy passes and long threes. He is actually playing the game better than everyone else with sound fundamentals and a superior knowledge of the sport. His shot is just as good as people say it is, and he needs barely any room at all to get it off. He is also a phenomenal ball handler which allows him to get that space for his jump shot, or he can beat his man to the basket because defenders need to guard him so tight to prevent the three. And even if he can’t get space to hit the jumper, he will still find a way.

Nobody in the NBA can create points off the ball the way Curry can. Curry is always roaming around on offense, setting screens, bouncing off screens to get an open look, and cutting to the basket the instant the defender loses sight.

I have never seen anyone with the touch around the rim that Curry has. He makes his layups look like floaters and puts enough arc to avoid blocks from any player of any size, while also limiting the contact he makes at the rim. By getting his layups out of his hand very quickly and with very high arc, he doesn’t need to get hit and rarely needs to earn his shots at the free throw line. The minimized fouls also help him for the long haul, protecting his thin frame.

He has become the most unguardable player in the world. He can shoot over you, go around you or even pass it, cut to the basket and get open for a score. Defenders can never let him get an inch of room, and his unparalleled skill around the basket and on the perimeter allows him to score even if he doesn’t get a full inch of space. He was even able to make Kawhi Leonard, reigning defensive player of the year, look like a rec league scrub guarding him. He handles interviews with a humble grace that is rarely seen from today’s athletes. More often than not you’ll hear Richard Sherman screaming and ranting in the face of Erin Andrews or Lebron James saying “I” 18 times in a 2 minute interview following a championship win in a team sport, so Curry is truly a breath of fresh air. On the court, he plays with a swagger and confidence that makes him a fan favorite all over the world. Whether its high-fiving a teammate, or turning to run back on defense before his shot even makes it through the basket, or the shimmies in front of the opposing team’s bench after hitting a big shot, the fans eat it all up.

Throughout my 21 years on Earth, the sport that I have always loved has changed a lot. The day I was born, the New York Knicks beat the New Jersey Nets in overtime to improve to 43-21 on the season, the Warriors were on their way to a 26-56 record, and Michael Jordan sent “the fax.” One year later the Bulls went 72-10 in the greatest season in NBA history. Today, the Knicks have lost 13 of their last 15 games, Michael Jordan is 53 and made more money in the past year than his entire playing career combined, and Steph Curry is blessing us with a season that may end up being even better than “His Airness.” And eventually Curry and the Warriors’ run of dominance will end just like it did with Michael’s Bulls, Kobe’s Lakers, and LeBron’s Heat. Although it’s hard to take a step back from enjoying the Warriors to see the big picture, we need to recognize the basketball history that is flashing right before our eyes. Stephen Curry is a transcendent player who is leading the way in changes to the game unlike any before him. He shoots the deep ball better than anyone in the history of the sport and has developed a complete offensive game that is all the more impressive because he is not 6’8″, not 250 pounds, and he is never the fastest player on the court. After this season, Curry will be a two-time MVP winner and just as likely two-time NBA champion. The Warriors have nothing stopping them from keeping their core together and could even add Kevin Durant this summer (but that is a topic for a different day). We could sit here for hours discussing what his legacy will be like when it’s all said and done. We could talk about how many MVPs he might win, or how many championships it will take for him to be a legend. We might even question what it will take for him to dethrone the GOAT. But, I propose that for just this once, we just enjoy the ride.